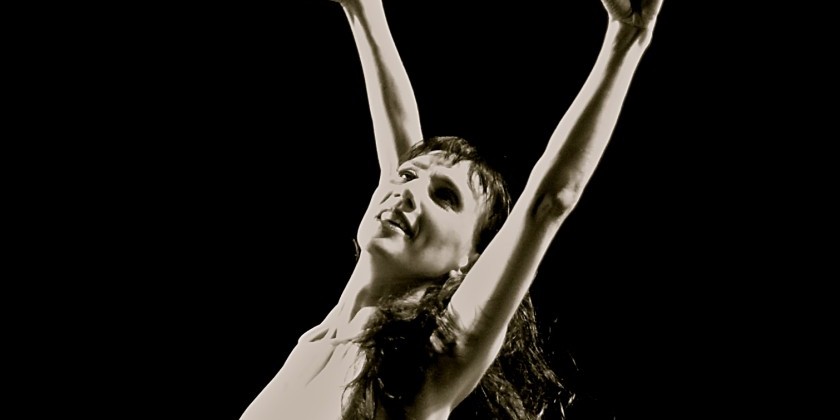 ALESSANDRA CORONA, a native of Cagliari, Sardinia, was trained at the National Ballet Academy in Rome, where she studied ballet, Graham, Limon, Cunningham, and jazz techniques.  In Italy, she danced for Asmed Ballet Company, directed by Paola Leoni, and Gino Landi.  She performed with Danza Prospettiva, directed by Vittorio Biagi, at the Teatro Dell’Opera di Roma and in Lausanne, Switzerland.  She toured internationally for five years as a principal dancer with Renato Greco Dance Company abroad and in the U.S.

Upon moving to New York, Alessandra joined Ballet Hispanico and quickly rose to the rank of principal dancer, touring with the Company for 15 years, originating roles in many ballets, and performing with the Company in the U.S., Europe, and South America.

At the invitation of Ann Reinking, she toured Europe and Asia for two years in the international company of Fosse, and appeared in the City Center Encores! production of Richard Rodgers’ No Strings, directed by Reinking.  She has performed as a guest artist at various international dance festivals, including “Notte di Stelle” at the historical amphitheater in Cagliari, Villa Pamphili Summer Festival in Rome, Jacob’s Pillow, and the Seattle International Dance Festival in the U.S., and more.

A resident of New York City, she founded Alessandra Corona Performing Works in 2012. 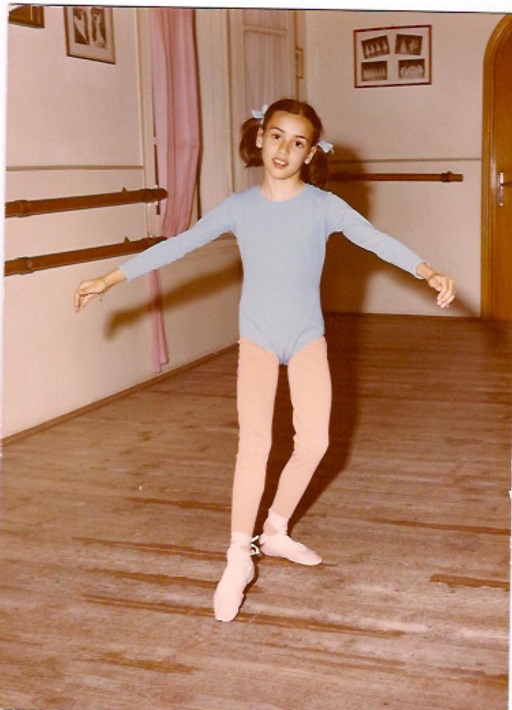 Tiziano Thomas Dossena : Alessandra, when did you start dancing and when did you realize this was going to be your life’s work?

Alessandra Corona:  When I was very young, I would always ask my mother to watch ballet performances on TV while my brothers were watching cartoons. I first started going to ballet classes at nine years old. The director of the school, Inez Palladino, was the pianist from the National Ballet Academy of Rome and the teacher, Paola Leoni, was also from that school. From day one, I realized that I would dedicate my life to dance. 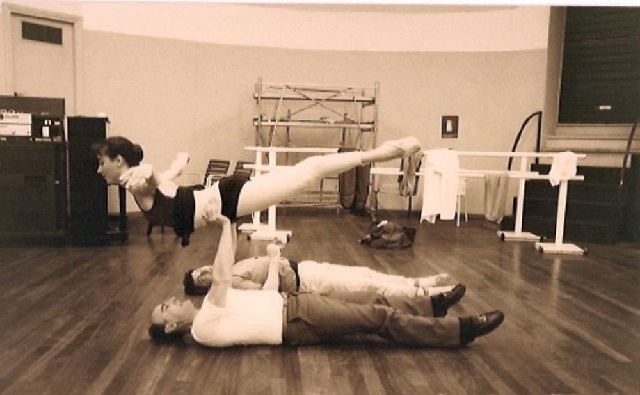 Tiziano Thomas Dossena : How difficult was the change, emotionally and physically, going from the National Ballet Academy to an actual Ballet company?

Alessandra Corona: I had decided to move to Rome and spend my final year of study at the National Ballet Academy there. But when I met with the director, Giuliana Penzi, she encouraged me to leave school and start dancing immediately. She advised me to audition for the Renato Greco dance Company and I won a six-month scholarship to train for the company. After only two months, I was invited to join the company where I worked and toured for five years.  The transition from the Academy was challenging insofar as we had to study many different techniques besides ballet: Graham, Limon, jazz, tap, etc. So, physically, it was demanding, but emotionally, it was very exciting and fulfilling. 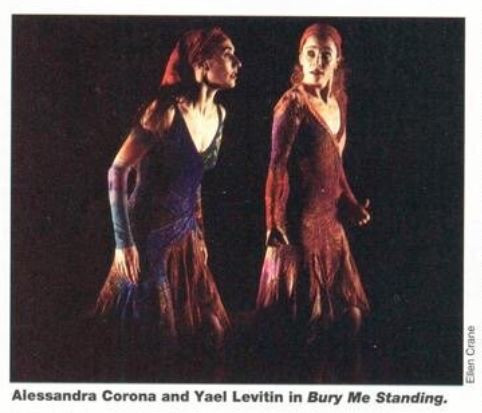 Tiziano Thomas Dossena : Were the experiences with the Asmed Ballet Company and Danza Prospettiva very different?

Alessandra Corona: Asmed Ballet was based in Cagliari and directed by Paola Leoni. The repertoire was mostly ballet with some Graham-based choreography by Joseph Fontano (National Ballet Academy). The company toured only in Sardinia. Danza Prospectiva was based

in Rome and directed by Vittorio Biaggi who choreographed his own version of the “Sagra della Primavera” of Stravinsky, which was a unique experience: we were on stage for 45 minutes without pause, the music was impossible to count so we had to memorize completely, we had to cover our bodies and face with clay. The piece premiered at the Bejart Ballet theater in Lausanne. 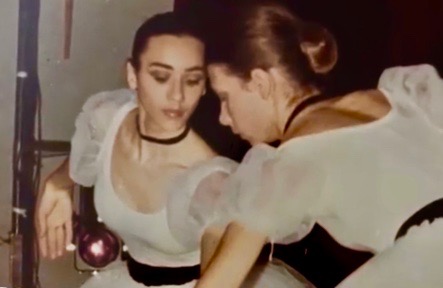 Tiziano Thomas Dossena : You then toured as the principal dancer with the Renato Greco Dance Company for five years? Was this still exclusively ballet? Where did you tour? What is the most important lesson you took away from those years?

Alessandra Corona: Yes, I toured with Renato Greco Dance Company for about 5 years as a principal dancer.  Classical ballet technique was a basic requirement for the company but the repertoire was based on Luigi and Matt Mattox technique, repertoire was mostly choreographed by Renato Greco and Maria Teresa dal Medico. The company toured all over the world including China, Egypt, and the U.S.  I performed the principal role of “Donna Laura di Carini” at the Brooklyn Academy of Music in New York.

Renato and Maria Teresa taught us how to sustain our determination and passion and how to persist in the face of difficulties.

Tiziano Thomas Dossena : How did you end up joining the Ballet Hispanico? Was this a big change, as performances go? You quickly rose to the principal dancer position and toured for fifteen years. What made you leave? 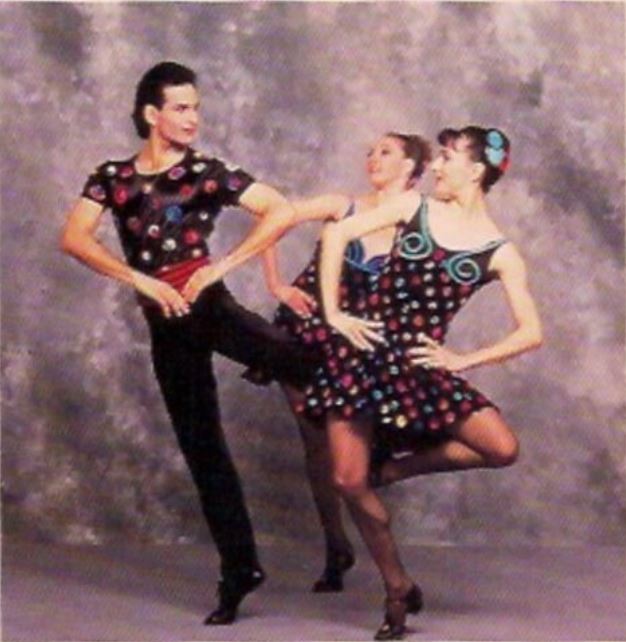 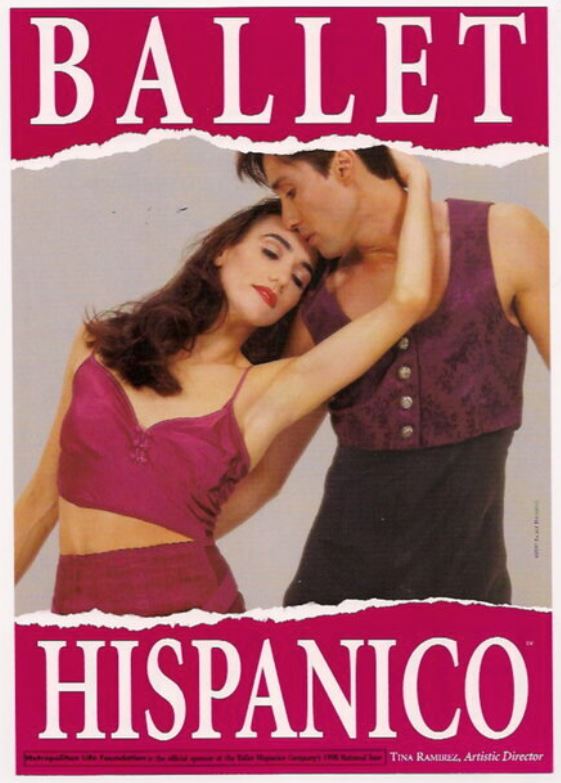 Tiziano Thomas Dossena : During my tour with Renato Greco in New York, there was an audition for Ballet Hispanico. At that time I couldn’t speak any English, but the artistic director, Tina Ramirez, communicated in a few Spanish words that she wanted me to join the company. This was a big change from my former experience because, as a repertory dance company, each piece was created by a different choreographer with his or her own style that had to be learned.  After a few years, I became a principal dancer and toured globally for 10 years, after which I was invited as a guest artist for the following 5 years for the most prestigious venues such as the Kennedy Center, the Joyce Theater, Jacob’s Pillow, Wolftrap,  and American Dance Festival. My career with BH company started in January 1991 and finished in spring 2006.

After that period, I was ready to try something different, like musical theater, and I started to take voice classes and was invited by Ann Reinking to join the first international company of the musical “Fosse.” 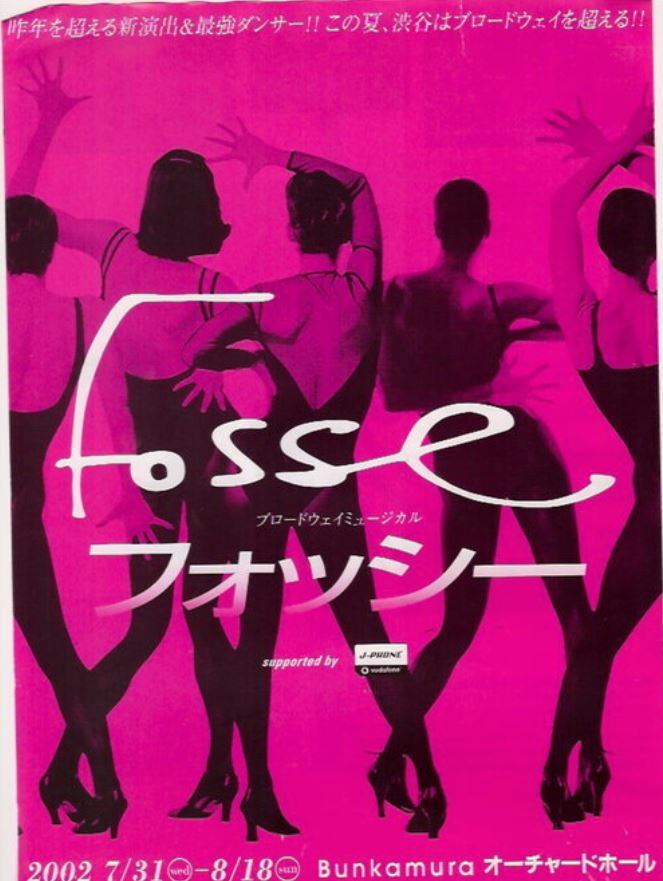 Tiziano Thomas Dossena : You toured Europe and Asia for two years in the international company of Fosse. Was this as exciting as it sounds? Which one was the most thrilling performance?

Alessandra Corona: It was very exciting; company members were top-level artists from all over the world, the orchestra and technicians were fantastic.

The most memorable performances were in Tokyo and Osaka. We stayed in Japan for about a month and performed every night to full houses in 2,000-seat theaters. Publicity for the show had started one year prior to our arrival and audiences were knowledgeable and enthusiastic. 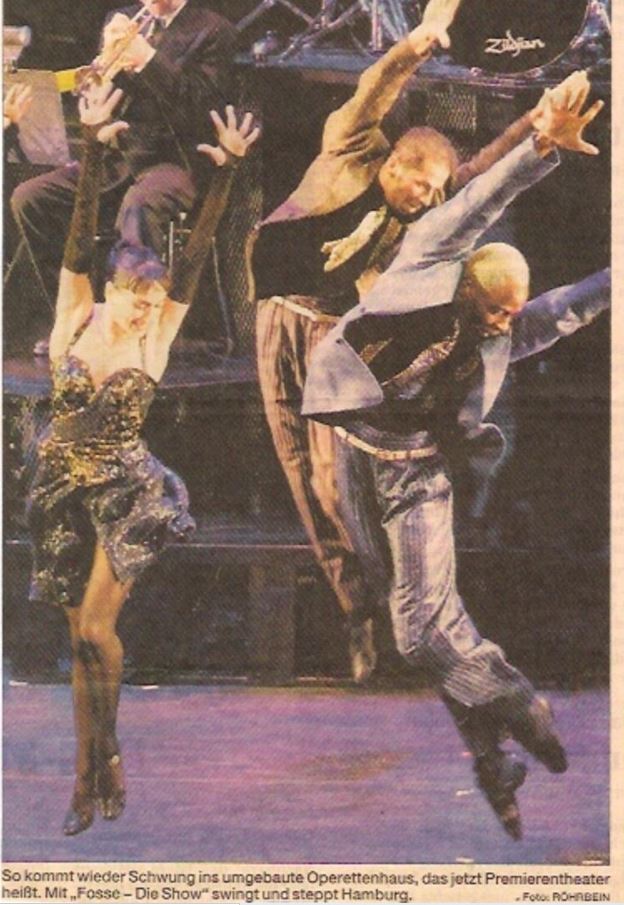 Tiziano Thomas Dossena : So, now you have your own performing company. Could you tell us when was it born and what are the goals you aim to achieve with it?

Alessandra Corona: I founded the company in 2012, first of all, to share my artistic experience with younger professional dancers to give them the same performing opportunity that I had. I also started to develop my own choreographic skills. I want to create a company with a unique aesthetic, integrating theater, visual art, and original music.

Tiziano Thomas Dossena : One of the works you choreographed is “Labyrinth”, which had its world premiere on January 10th. Could you tell us what was the theme and what was the emotional response you were aspiring to evoke with this choreography?

Alessandra Corona: My latest work is “Labyrinth,” from which we presented a short excerpt at the Booking Dance Festival on January 10. Because of the pandemic, we had to create a piece that was filmed outdoors and presented online. This will be included in the upcoming world premiere of the full version in a theater on May 6. This choreography was about isolation within a group and the personal struggle for freedom that we are all experiencing during this time. The Labyrinth is symbolic of the path we construct through our lives- it is both confining and liberating at the same time. 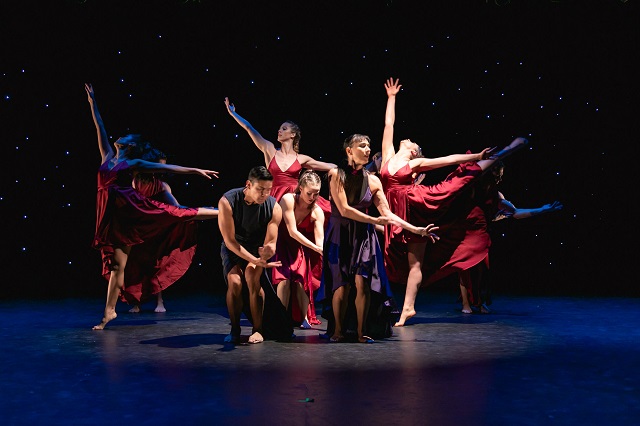 A scene from Labyrinth 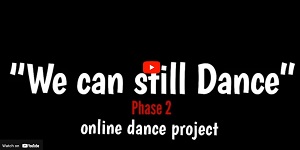 Tiziano Thomas Dossena : What is your online project “We can still dance” about?

Alessandra Corona: During the lockdown, I asked the dancers to create a short dance within a confined indoor space. The idea was to inspire them to keep moving and adapt to a restricted environment. The second part was during summer where we could film the dancers outdoors.

I created a surreal backdrop simulating a field of sunflowers, which gave a sense of spaciousness and freedom.

Tiziano Thomas Dossena : What other projects are you developing at this time?

Alessandra Corona: ACPW is currently completing work on two new pieces to be presented at the St. Jean Theater in New York on May 6. One is the full version of Labyrinth choreographed by me in collaboration with the dancers and the other is the full version of “Breaking through the Generational Curse” by Maiya Redding. We started these two projects last year and were scheduled to perform them in April 2020, but this was interrupted by the pandemic. 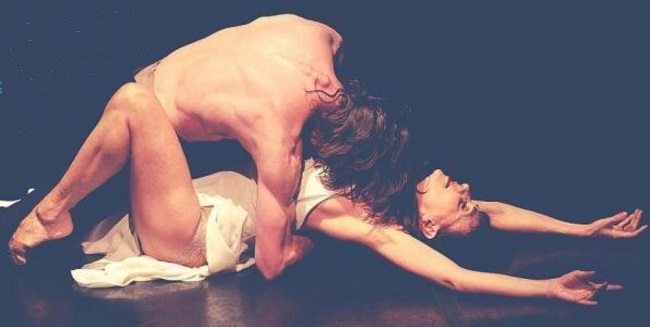 A scene from “Amore Impossibile”

Tiziano Thomas Dossena : You also teach dancing online. How does that work?

Alessandra Corona: I was teaching ballet classes online every day since March 2020, mainly to the dancers in the company to keep them connected and physically prepared. From June 12 to July 10, 2020, each Friday the class was open to the public and the contributions received were donated to the BLM organization. Teaching online is limited but it helps a lot to keep us connected emotionally. 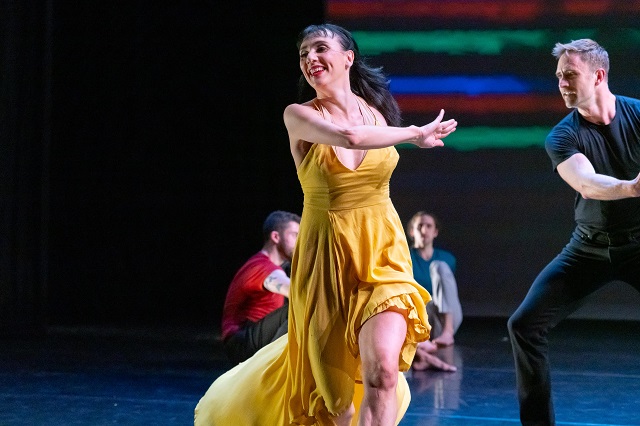 Tiziano Thomas Dossena : What is your dream?

Alessandra Corona: My dream is to continue to be engaged in exciting creative projects with the company and tour with them. 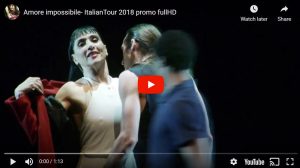 Tiziano Thomas Dossena : Do you miss Italy, and in particular your Sardinia? When this virus has finally gotten out of the way, do you plan to tour Italy with your company?

Alessandra Corona: I miss Italy and, in particular, Sardinia very much! The company has toured in Sardinia and Rome and I find it interesting to share Italian culture with the dancers and at the same time share the American artistic style with Italian audiences. I feel fortunate to be part of two different artistic worlds. We definitely look forward to touring again in Italy. 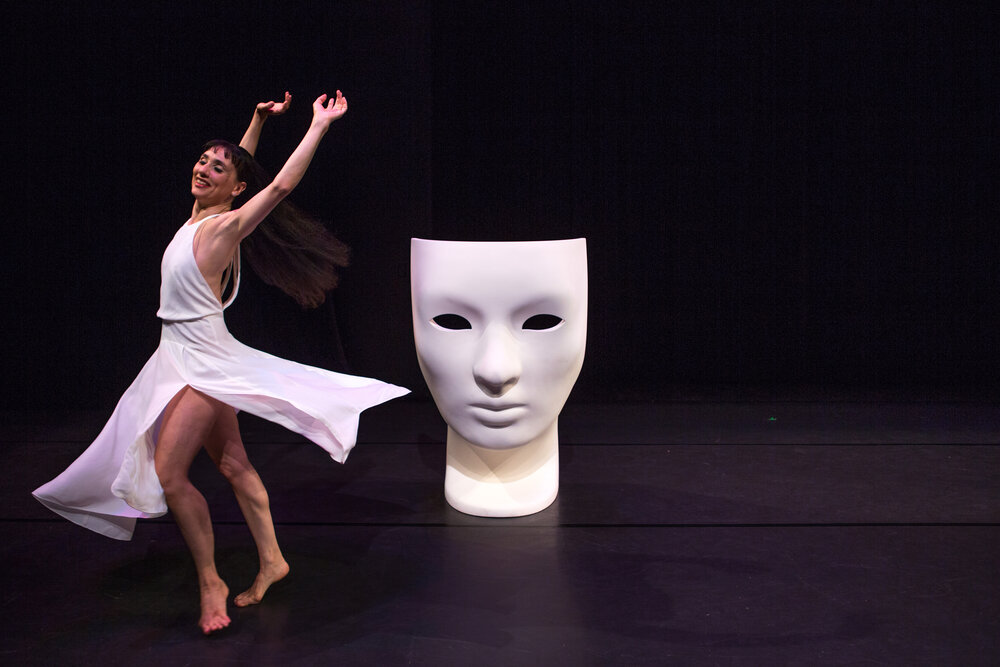 Tiziano Thomas Dossena : Do you have any suggestions for a young woman who wants to become a dancer?

Alessandra Corona: It is very hard work and you have to be very committed.  I recommend that one dedicates a long time to the preparation and to acquiring a solid technical base. You need to sustain a strong belief in yourself and continue to nurture your dreams.

Tiziano Thomas Dossena : What are your other interests? Do you still cook Italian style?

Alessandra Corona: Being the artistic director, I am involved in all aspects of the production process, including costume design, set and lighting design, and other visual effects such as video, plus collaborating with the music composer. I continue to expand my knowledge in these areas.

Of course, I cook Italian style!  I make some specific Sardinian dishes such as “Fregola with clams” and “Malloreddusu alla campidanese”.

Before the pandemic, we organized parties for the audiences following the shows to meet the artists featuring Sardinian cuisine, including pasta, different cheeses, and wines.

Tiziano Thomas Dossena : If you had to define yourself with three adjectives, what would they be?

Tiziano Thomas Dossena : If you had the opportunity to meet a person from the past or the present, anyone you want, who would that person be, and what would you like to ask them?

Alessandra Corona: I would have loved to meet Pina Bausch and ask her “Can I please work for you?” “Can you please create a piece for my company?”

Tiziano Thomas Dossena : A message for our readers?

Alessandra Corona: We are very excited that theaters are finally reopening and we are looking forward to welcoming audiences to our upcoming show! We want to let everyone know that the protective measures in place ensure that it is safe for people to enjoy and support the artists!