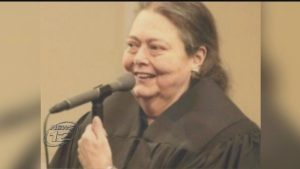 A City Court Judge in White Plains filed a lawsuit1 against the Chief Judge and the Administrative Judge of the New York State court system. She claimed violations of federal2discrimination laws against both of them and under state law3 against one of them, for various physical disabilities. Her ailments include Chronic Obstructive Pulmonary Disease, a fungal infection in her legs, blood clotting issues, and obesity. Medication she takes produces urgent needs to use the restroom, and she is unable to move quickly and uses a motorized scooter. There was considerable controversy over her appointment as a judge due to her numerous health issues. She was out sick much of the time during her first four months on the bench. On one occasion, while she was alone in the room, she was not wearing a pad and was unable to get to the restroom in time, so she defecated in a garbage bag with a plastic liner. She double bagged and tied it, but a carpet stain about the size of a quarter resulted. [Personal Comment = Most people grimace when they hear this, but representing clients with limited control over bowel function in medical malpractice cases has made me much more sympathetic. Aside from the horrible social repercussions they face, these people cannot work unless employers cut them some slack. Please consider that impairment of this critical body function, which we all take for granted, could happen to you, and if it ever does, you will be very grateful for these laws that provide some protection in the workplace.]

The following are allegations from her complaint4, many of which will presumably be disputed by the defense:

Hostile Work Environment – After this incident, court personnel surrounded the area with yellow tape as if it were a crime scene, and put on Hazmat suits and face masks. It’s difficult to think of any reason for going this far except to embarrass the judge.  Even though she was using a different courtroom the next day, a court officer wore yellow dish washing gloves during the proceedings, and when asked why, she answered “for my health”. The day after the incident, the state Chief Administrative Judge, Lawrence Marks, suspended her. She was required to attend excessive, duplicative and inconvenient medical examinations, including a psychiatric examination, despite the fact that all of her illnesses were completely physical. 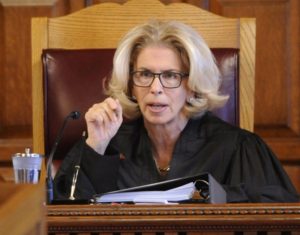 Failure to Provide Reasonable Accommodation – According to the allegations in her complaint, the chief clerk refused to give her the key to the judge’s restroom when she was first appointed. She had to use another restroom which was further away from where she would normally be, and which was located in a frequently used conference room, affording much less privacy.  After a long suspension (albeit with full pay and benefits) and after the numerous doctors she was required to go to certified that there was no medical reason why she could not return to work, she was reinstated. However, a month later, she was suspended again because court personnel smelled “unpleasant and offensive” odors. She responded that the bandages she used for the fungal infection on her leg produced unpleasant odors when she changed them, and claimed she had previously requested odor-free receptacles for this, which had been promised to her, but were never provided.

She sued in federal court, and Judges DiFiore and Marks made a motion to have the case dismissed against them5. The defense motion claimed that there was no subject matter jurisdiction6under the federal claims, and that even if all of the factual allegations in the complaint were taken as true (but not those “facts” that are really just legal conclusions)7, the case should have been dismissed entirely against Judge DiFiore, and most of the claims should have been dismissed against Judge Marks.

Can Judges be Sued– and Not Just Any Judges; the Chief Judge and the Administrative Judge of the state court system, under the Americans with Disabilities Act8 (“ADA”) and NY state discrimination  laws? 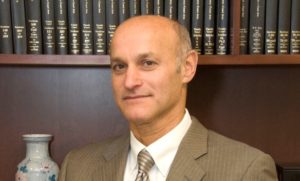 The defense motion presented some significant legal hurdles, but Judge Vincent Briccetti of the Southern District of New York, held9 that her case could go forward against both the Chief Judge DiFiore and Administrative Judge Marks.

First, it is accepted law that no individuals, let alone judges, can generally be sued under the ADA statute, only “employers”. The term “employer” is defined broadly enough under some other employment laws to include many supervisors, (i.e., the wage and hour laws, 29 USCS § 203(d); NY Labor Law § 2(6)), but supervisors generally cannot be “employers” under the ADA10.  Second, aside from the general rule against suing individuals under the ADA, this case presents another issue – state officials in New York, just like those of any other state, are generally immune from being sued in federal court.11 This was the basis of the defense motion claiming that there was no “subject matter jurisdiction.”

However, the complaint only asked for a ruling that these judges stop violating the ADA in the future12, so she was not asking the court to make them pay any damages. This is an exception to the rule against naming individual defendants in ADA suits that was created long ago.13 It applies if the person suing claims that there is a violation of federal law that is continuing, and if the only thing asked for is that the individuals being sued make that violation stop. In order to do this, the individuals being sued must also be named in the lawsuit in their representative capacities, (which they were) and they must have enough authority to make the violation complained of stop.

Judge Briccetti, in denying the motion to dismiss the federal claims, held that it was enough that the judges sued in their official capacities had the authority to control and correct the claimed violations.

Chief Administrative Judge Marks was also sued under state law. Individuals generally can be sued under the New York State discrimination laws if they if they have the power to to do more than carry out personnel decisions made by others14, and the employer acquiesced in the discriminatory conduct or subsequently condoned it15. The Court found that the allegations in the complaint were enough to plausibly claim that Judge Marks had condoned the refusal to let her use the judge’s bathroom, the decision to barricade the courtroom with police tape, the use of the Hazmat suits, and that he had failed to investigate it or take any corrective action, which he clearly had the power to do.

For the Most Part, Can Judges Normally Be Sued?

Generally no. We want judges to be independent, so they have to be insulated from the pesky lawsuits which would always be brought by people who are unhappy with the decisions they make.16 However, there are exceptions to this rule, for example, when a judge demotes or discharges an employee and discrimination is alleged. This is considered an administrative function, which a judge performs much like any other boss, as opposed to the judge’s function adjudicating cases, which the immunity was really designed to protect.17 Because these judges were performing functions of the type that are normally performed by other bosses in other businesses, they can be sued in much the same way as other bosses can be sued in other businesses.

Although this decision is a victory for Judge Schollenberger, it is just a ruling that she has made out a legally sufficient case. It remains to be seen how her lawsuit will come out in the end.

[11] This is called sovereign immunity, and it arises under the Eleventh Amendment.

[12] This is called prospective injunctive relief.